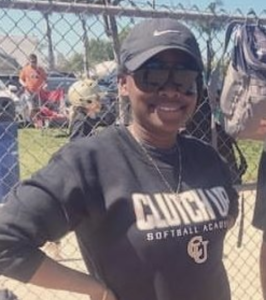 Coach Leesa Harris played travel ball for Cal Lite where she earned a full scholarship to
play at Cal State Fullerton as a starting outfielder.  During her time as a student-athlete,
she was a two-time Big West Conference selection and continues to hold the record for
best fielding percentage.  Leesa graduated from CSUF in 2015 with a degree in Human
Services.  She is currently the Head Coach at View Park Preparatory Charter High
School where they have won 3 CIF Championships in the last 4 years.  Leesa was also
named LA City Coach of the Year for 3 years straight and the 2017-2018 California
State Coach of the Year.  She is Clutch Up Softball Academy&#39;s 16u Coach and the
Assistant Coach at West Los Angeles College.